The Perishers in Shindig! Happening 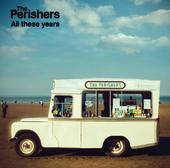 THE PERISHERS
All These Years
www.theperishers.com

Fancy some infectious, well-crafted, indie-pop? Your luck’s in – tonight we’re gonna party like it’s 1989! From the opening notes of 'Spectre', it’s obvious that the long, long wait for this London-based outfit’s third album has been well rewarded. These are songs to put a smile on your face and spring in your step. If you’re looking for something daringly experimental, then continue your search elsewhere – these boys have spent the past two albums in the laboratory and have come up with a formula that works beautifully – which, I suppose, makes this a peer review. There’s the hugely enjoyable no-nonsense, heads-down indie of 'I’ll Deny', 'Springfield' and 'You’ll Never Learn To Leave It Alone', the latter with a solo that wouldn’t sound out of place on a J Mascis album. So far, so good. Then, on 'Mean Old Man', the engaing pop sensibility that The Perishers share with the likes of Teenage Fanclub  meets a rawer groove to superb effect, with powerful drums underpinning guitars that make the blood rush and the spirits soar. The title track showcases a lighter side, allowing the note-perfect harmonies to combine with a melody so infectious it should be in quarantine while 'Two Parter' is a title that could have been dreamt up by the Ronseal marketing department it’s so apt. The first half of this song is textbook jangly indie, a bit hushed, a bit hesitant, before the guitars kick in and the song flies to an optimistic conclusion. All this and, in 'White Skies', the sort of perfect-pop of which Ian Brodie would be proud. Interestingly, an early Perishers video saw the band win over a crowd of OAPs. There’s more than a grain of truth here – this is unashamedly broad music that could, and should, be loved by everyone.
Barnaby Harsent

www.happening-magazine.com
Posted by Jon at 06:06