The Wicked Whispers in Bearded 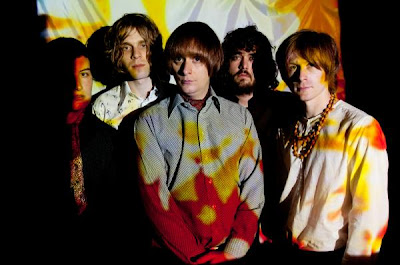 More dispatches from up north this week as Richard Lewis hunts out the latest sounds emanating from the port of Liverpool.

Posted on Jul 7th, 2011 in Features and Interviews, The Wicked Whispers, Electone / By Richard Lewis

Talking of record releases on the kind which are tangible, The Wicked Whispers unveiled their debut EP, The Dark Delights Of…. Released on ultra-collectable 10” vinyl, via their own label, Electone Records, a raucous performance at the Kazimier provided the EP’s launch party. The Vox Continental driven four piece source The Doors, The Pink Floyd and The Byrds, effortlessly recreating their sound live. With some of the best haircuts seen on a guitar band since the doyens US Underground were captured on the Nuggets compilation, the quartet bottle a wealth of vintage reference points into short bursts of sound.

Best sampled on EP track ‘Amanda Lavender’, a Syd Barrett-esque paean (think See Emily Play) to the fictional heroine, the two minute odyssey is their most straightforward pop song so far. Accompanied by a mist-shrouded video shot in Snowdonia by acclaimed rock photographer Mark McNulty, the Country Garden setting and the pulchritudinous Charlotte Cooper in the title role make for a memorable clip.