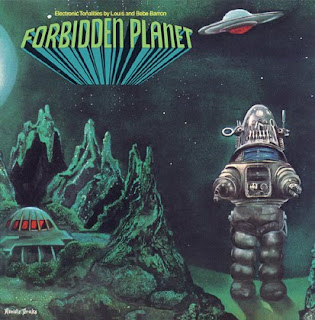 A classic of Science fiction cinema, with its plot based on Shakespeare's The Tempest, and its extraordinary visual style created by Mentor Huebner, Forbidden Planet starred the late lamented Leslie Neilson in his then serious mode, and a bona fide old-school movie star in Walter Pidgeon, which took the movie out of the kiddie sci-fi category into serious filmaking.

Forbidden Planet's innovative electronic music score (credited as "electronic tonalities"(partly to avoid having to pay any of the film industry music guild fees haha) was composed by Louis and Bebe Barron. The MGM producer Dore Schary discovered this couple quite by chance at a beatnik nightclub in Greenwich Village while on a family Christmas visit to New York City. Schary hired them on the spot to compose his film's musical score. The theremin (which was not used in Forbidden Planet) had been used as early as 1945, in the film Spellbound, but the Barron's score is widely credited with being the first completely electronic score.

Using ideas and procedures from the book, Cybernetics: Or, Control and Communication in the Animal and the Machine (1948) by Norbert Wiener, Louis Barron constructed his own electronic circuits that he used to generate the "bleeps, blurps, whirs, whines, throbs, hums, and screeches". After recording the basic sounds, the Barrons further manipulated them, adding effects, such as reverberation and delay, and reversing or changing the speeds of certain sounds.

Liner note writer and renowned journalist and broadcaster John Cavanagh and label boss, produer and fan of both the film and the Barrons Joe Foster (Creation Records etc) are available for comment as are select cast members and musicians. Evidently there is a huge story here on sound recording, electronics and, last but not least, cinema.

Please contact No Other for more information and to organise interviews or promo copies (deluxe vinyl copies are limited, although if you can offer a full review and need the record please request. However sending high quality MP3s and full artwork is far easier).

As the Saturn-shaped spaceship touches down on Altair IV, there’s something reminiscent of the mushroom clouds that hovered over Eisenhower-era American life. The setting is 2,000 years from now, but Dr. Morbius’s boast of 9,200thermonuclear reactors powering a massive underground machine are firmly rooted in a time when people were encouraged to “duck and cover” to survive a blast from The Bomb. Even Robby The Robot has a fulsomeness of design akin to 1950s Packards or Frigidaires. However, the soundtrack to Forbidden Planet – created using the earliest tape recording techniques – still retains a timeless and eerie quality quite distinct from any quaintness of the sci-fi cinema it accompanied.When Bebe and Louis Barron married she was working as a researcher for Life magazine; he had returned from Mexico after several years trying to write a play whilst living in the jungle. In a 1989 interview for the ReSearch Incredibly Strange Music book, Bebe said, “For a wedding present a German friend gave us one of the first tape recorders imported into this country. It was the same model Hitler had used to record his speeches, so that if something happened to him people might think he was still alive”. While Bing Crosby spotted the commercial potential of the Fuhrer’s propaganda machine and funded the Ampex Corporation to replicate the Telefunken recorders, Bebe and Louis Barron would open avenues of creativity in magnetic sound for all to follow.

Around 1950 they moved from Monterey to New York where they became part of the Greenwich Village “Artists’ Club”, meeting Jackson Pollock, composer Ned Rorem and, most importantly for the Barrons, John Cage, who commissioned Bebe and Louis to work with him and David Tudor. The result of a year in the studio was Cage’s Williams Mix, comprised of 600 recordings spliced together in tiny fragments to create a four minute piece. The laborious editing process was rewarded with gourmet treats, as each person involved tried to out-cook the others at the end of long studio days!

Bebe recalled, “Cage would bring all these fabulous composers into our studio: Pierre Boulez, Stockhausen... Edgard Varèse spent a lot of time at our place; we were the only ones who had a real studio for doing this sort of thing”. The Barron’s connection to writers led to a short lived spoken-word record label which released only four red vinyl LPs before funds ran out, but what a roster: Anais Nin, Henry Miller, Aldous Huxley and Tennessee Williams.

Louis Barron believed that commercial links would demean their music, so although he and Bebe accepted commissions from IBM and Ford, their attentions turned towards arthouse film soundtracks. Then came their break into an unsuspecting movie mainstream. “We read in the paper that Dore Schary [head of MGM] was coming to town”, recalled Bebe. “His wife was going to host an art exhibit at a gallery in New York. We decided to crash the opening and introduce ourselves to him – and we did! We didn’t know what he looked like or anything, but Louis said, Look for the least pretentious-looking guy in the whole bunch – I’ll bet you anything that’ll be Dore Schary”.

Louis was right and within a couple of weeks they were in Schary’s office where he immediately commissioned twenty minutes of music for Forbidden Planet. Harry Partch had already been asked to compose music for the film, but MGM decided to go with the Barrons instead, even though this involved a to and fro process between Greenwich Village and Hollywood, as Bebe and Louis refused to move West.

Electronics had been Louis Barron’s boyhood hobby. Becoming fascinated with Norbert Weiner’s theories on cybernetics, he began to build circuits based on the mathematicians ideas and adapted them to create sounds. These devices produced patterns which could never be repeated, so the Barrons would try to capture everything, then choose the best sounds to manipulate by splicing the tape, altering the pitch and adding other effects. Rather than try to regulate the circuits, they sought to explore the free sound they produced.

John Cage considered the Forbidden Planet soundtrack “disgustingly orchestral and musical” – a strange irony when Bebe and Louis had rejected the urge to control their sound generators. His view was in a minority, as the critics raved, audiences applauded wildly when they first heard this entirely new sonic experience in the cinema and, after screenings, Bebe was often told “it sounds like my wildest dreams!”

There was a third strand of opinion and it was voiced by the powerful Musicians’ Union who decreed that the Barrons’ soundtrack could not be described as music. Instead, the titles credit “electronic tonalities”. This decree rendered Louis and Bebe’s work ineligible for academy award nomination, as it could not fit in either the music or special effects categories. The Musicians’ Union were deeply suspicious of anything to do with tape recorders in those early days, so the Barrons were forbidden from becoming members. Although they continued to provide music for underground films in later years, Forbidden Planet was their first and last Hollywood soundtrack. Several points of unrealized potential hang over this film. There’s the question of what the Barrons might have achieved with better recognition of the music they made. At the time, MGM didn’t even release a soundtrack album, opting instead for an orchestrated version of the theme by the David Rose Orchestra. Bebe felt the film was somewhat spoiled by attempts to oversimplify the plot, deleting many of the Freudian elements from the original cut she and Louis had worked with.

Still, Forbidden Planet lives on, regarded as a classic of its era and it contains work by many innovators, aside from those who realized the visuals. The designer of Anne Francis’ mini-dress for the film was Helen Rose, who is often credited with the creation of the mini-skirt. That’s an impressive piece of pop culture iconography, but Bebe Barron could lay a pretty solid claim as the inventor of the tape-loop. Beat that!

London Psychedelic-Pop band The Chemistry Set has quite a history. Flexidisc kings and veterans of the Imaginary label (Chameleons, Cud, plus countless ’60s tribute albums), they helped pioneer the late ’80s neo-psychedelic boom that was a pivotal phase in pop music history leading to the Madchestercraze unfolding around them.

Indeed counting Factory & Hacienda boss Tony Wilson amongst their fans, The Chemistry Set reached the coveted Indie Top 20 and were featured in both UK mainstream and underground music press and received regular airplay on the legendary John Peel’s show (Peel even went so far as to sending the band a hand-written fan letter!) The band split in 1991, took a bit of a hiatus, remaining silent… until The Chemistry Set “MACH II” remarkably reappeared in 2008 when their unreleased LP from 1989 Sounds Like Painting was uploaded onto numerous blogs and was downloaded over 10,000 times. A reform beckoned.

Cult Arranger/songwriter [and former Electric Prunes producer] David Axelrod loves The Chemistry Set, saying “Real Music! Music that makes you think and really listen to!” Axelrod loved how they have added a symphonic section of his song ‘Sanctus’ from The Electric Prunes’ masterwork Mass in F Minor into their new reworking on the album of Del Shannon’s ‘Silver Birch’. (A song originally found on Shannon’s The Further Adventures Of Charles Westover, his cult ’68 LP widely acknowledged by rock aficionados to be the pop milestone of his post-‘Runaway’era.)

The Chemistry Set have released two CD’s since their return (Alchemy#101 & This Day Will Never Happen Again) both of which were heralded by critical acclaim and national radio play in the UK, America and Europe.

New single ‘Impossible Love’ is over six minutes of stunning, swirling, Stones Roses-meet-Chemical Brothers psychedelic-pop. Pop Junkie described ‘Impossible Love’ as genius.“It has a wonderful groove – think Stone Roses before the drugs took over. Best track of 2011 so far? I think so”

The single will be released in late May 2011 on 7” coloured vinyl by Fruits de Mer records.

Please contact no-other@hotmail.com for promo copies and to organise interviews and radio sessions

NO OTHER PRESS & PUBLICITY

The Who, Won't Get Fooled Again, Shindig! review 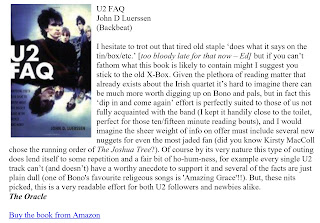 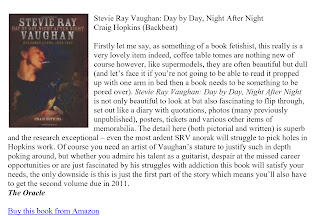 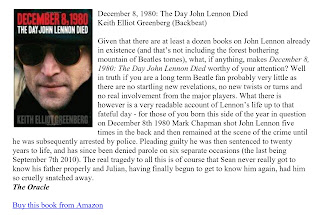 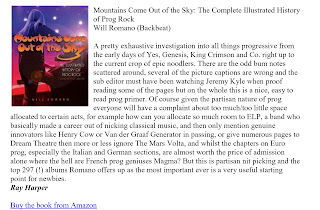 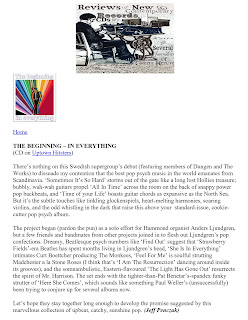 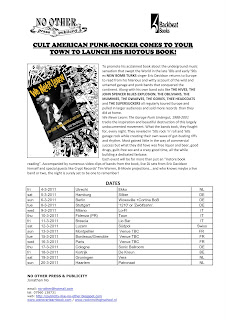 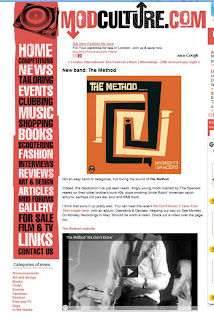 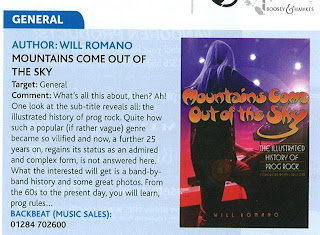 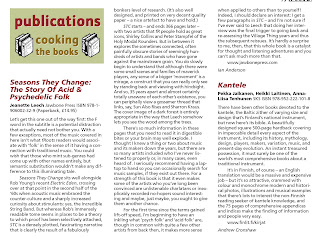 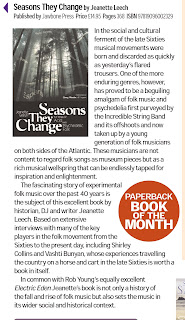